While we wrap up another year it is time once again to throw out the traditional “Forecast” report for the up coming year. But before we look ahead we need to do a quick review of some of the relevant details from 2017.

Many pundits and articles are predicting a fairly imminent correction because the market valuation is at record highs. First a quick primer, when valuations are mentioned, unless stated otherwise typically refer to the markets Price to Earnings ratio – simple dividing the markets “price” (I am using 2700 for the S&P 500) and the sum of the earnings for the constituent companies.

The market valuation is based on (anticipated) corporate earnings, specifically the growth rate of said earnings as the market is forward looking. Below is a chart from Ed Yardini & Associates blog that shows the level of corporate earnings since 2003. While much has been made of the low volatility, high growth stock market in 2017, such a year is hardly surprising when looked at while comparing to earnings growth to recent years. 2017 earnings, both anticipated and actual, have accelerated sharply from flat growth in 2016. While the “P” or price of the S&P 500 has risen sharply, so have earnings.

Below are the projected P/E ratios based on a level 2700 for S&P 500 and consensus projected earnings and earnings growth rates from www.YCharts.com.

While pundits like to cry that the sky is falling (it makes great headlines), the fact is that the market valuation is getting cheaper, not more expensive. If we maintain the current valuation or P/E then based on earnings projections the market can appreciate by 11.2% and 9.9% in 2018 and 2019 respectively. Granted earnings projections are guesses, but the market moves on those guesses, and will correct as necessary when actual results are disclosed.

As far as I have read, earnings projections have not factored in the economic boost from the tax packages being proposed. Any economic boost from tax cuts could serve to bolster stock returns or bring down the market valuation. However, expect a return of normal volatility as earnings projections will be difficult with simultaneous fiscal stimulus and Fed tightening.

In 2018 expect at least one 10% decline through the year, if not more. Do not be scared out. Remember that historically 10% declines are normal every year! With the magnitude and timing of the effect of tax cuts expect that earnings estimates will be far less accurate in 2018. The market trades on earnings and uncertainty will create volatility, but an overall positive return in 2018.

In the latter part of this year short term interest rates have moved up coincident with the Fed’s tightening. The black area showing where rates have come from and the red line depicting current rates. Interestingly, long term interest rates have come down, beginning to move toward an inverted yield curve. When truly inverted short term rates are actually higher than long term rates. Such a setup typically precludes an economic slowdown, possible recession and a bear market or serious correction. 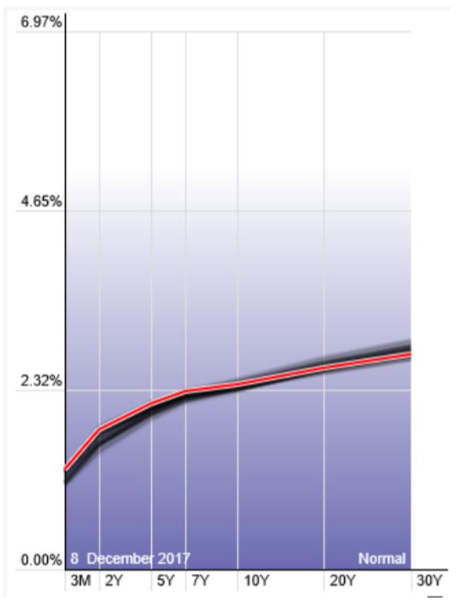 This is the only time that I can recall that fiscal and monetary policies are in synch... by moving in opposite directions. While Fed tightening alone would likely cause a recession in 2019 as indicated by the yield curve, fiscal stimulus via tax cuts will (hopefully) offset Fed action and keep the expansion going. Without tax cuts a recession is a strong probability. But the Fed does need to normalize rates. With 3%+ economic growth short term rates should be significantly higher.

Besides being irrelevant, it is far from accurate. Secular, or long term cycles have defined the stock market since its inception. In the modern era, a bull market started in 1940 during WWII and didn’t end until 1965 – 25 years later. More recently the biggest bull market started in 1980 and finished 20 years later in 2000. From 2000 to 2013 the market was stuck in a 13 year secular bear market, punctuated by two separate 50% declines. A secular bull market is defined as one in which the start is when the market reaches a new all time high...and stays there. By that measure, this secular bull started just 5 years ago, short by any measure.

While true that bear markets begin at extreme valuation levels, as pointed out earlier, valuations are trending down not up. Although U S earnings growth rate may be slowing, globally the earnings expansion is still early. In the U S earnings will depend on who wins out in the tug of war between Fed policy of rising interest rates (negative) vs. fiscal stimulus of tax cuts (positive). By 2019 my money is on the fiscal stimulus prevailing.

The first rule of successful investing is to determine what you will do if you are wrong. The worst investment mistakes many times come from being so over confident in an investment that the investor doggedly sticks to it even when expectations are not being met. Even with what may seem to be an obvious trade, there are always exogenous uncontrollable events that can sink the best of plans. With what I anticipate to be a rocky road in 2018, if you are risk adverse you may want to stick with lower volatility investments.

The other strategy is to focus on long term trends that can prevail regardless of the results of government policies. Robotics, artificial intelligence, data use and collection are unstoppable trends. Health care has not had an overall good year in 2017, but globally the developed world is aging and money will continue to be spent to prolong and increase the quality of life as we age. While this doesn’t mean such investments won’t be volatile, they are industries that will grow over time.