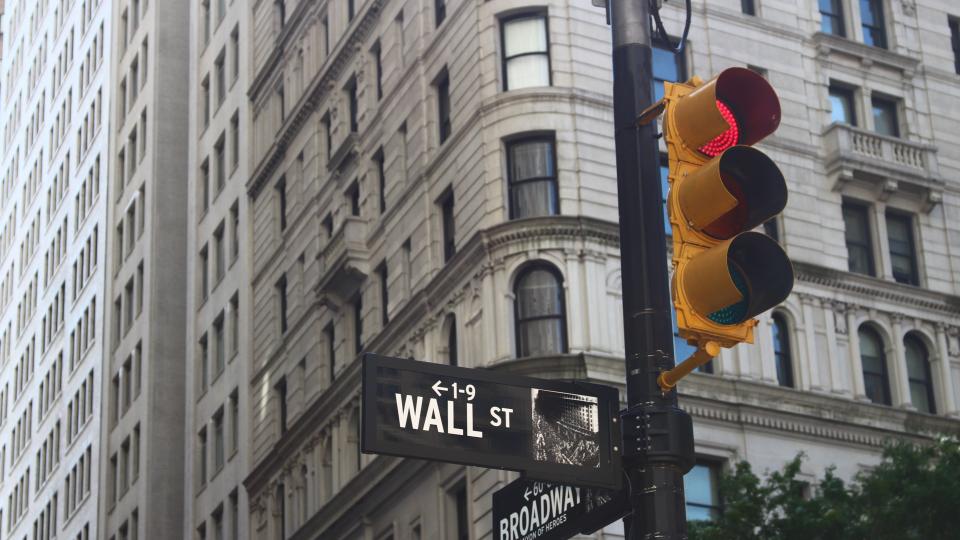 One of the “deadliest” sayings in investing is “This time it’s different”. Many investors and pundits, when faced with data contrary to their current views will rationalize a position by saying those infamous words. As they say as well, “history may not repeat, but it does rhyme.” While the big picture may not repeat, policy decisions and market reactions do. Whether interest rates are changing due to inflation fears, a slowing or accelerating economy, macro dollar policy…the results are the same. Fed tightening (rising interest rates) are never good for the market or the economy. Fed loosening will (eventually) spark an economic boost. The why may change but not the results.

The big picture is not pretty. July and August have been particularly volatile. Volatility is a precursor to bad things to come more often then good. The global economy is horrid with Japan, Germany and the rest of the Eurozone slowing. China is slowing. The U S economy is slowing. Negative interest rates are freaking out Wall Street. As we approach the 12-month point before the election, Democratic rhetoric will pick up citing examples of how bad things are. Trump will tweet back that America is Great Again! Volatility is unlikely to subside. The trend is not an investors friend.

However, let’s put things into perspective.

First let’s look at volatility. Depending on one’s predisposition volatility is just “Wall Street” and can be ignored, or it’s a reason to run for the hills, or the proverbial mattress. Reality is in between somewhere. Extreme volatility is not normal nor is it good. But by following the daily gyrations (so you don’t have to) there are really two major causes of the current volatility. The easiest to tackle is Trump v. China. China or Trump threatens more tariffs and the market is down. Some hope for reconciliation and the market rebounds. The last part being key and really the reason to hold off making portfolio changes. I have no idea how this will play out. Best guess is nothing overly substantial happens until we close in on election day. If Trump looks to be leading strongly in the polls, China will cave. Their economy is weakening. They don’t have elections, they have coups. And bottom line, they are wrong. Nations that want to play with the big boys, must act like the big boys. In hindsight, their admission to the World Trade Organization was premature. They want to have high tariffs on imports and free access to the world’s markets. They want to blackmail companies for their proprietary information. China needs to play by the rules or be kicked back to second world status on the world stage. Here are a couple of interesting articles on the subject: https://www.washingtontimes.com/news/2019/sep/3/deceiving-sky-reveals-how-china-steals-tech-secret/ and here: https://www.mauldineconomics.com/frontlinethoughts/digging-a-hole-to-china

But in the here and now, a trade war with China is not good for our economy either. As we’re about to see, we are not near a recession. I’m not even sure that all areas are slowing. With any positive economic news and a softening on China, this market has a way to run on the upside. Our stance now is that missing out on an upside move is a greater risk than riding out the market volatility.

Below is a chart from www.econpi.com Moving counter clockwise the chart graphs economic data from EXPANSION, (top right quadrant) to DECLINE, CONTRACTION and then RECOVERY. There are only two things to look at. The RED box is the average or mean for all data tracked. It is right on the line between EXPANSION and DECLINE. The GREEN box labeled LD splits out the Leading Indicators, or the more predictive of the data tracked. LD is still in the EXPANSION Quad. The RED rectangle shows where the Mean of Coordinates (MoC), has been at the start of recent recessions. We have a long way to go to get to the recessionary point. All indicators are still well above their baseline, the horizontal line splitting the graph. 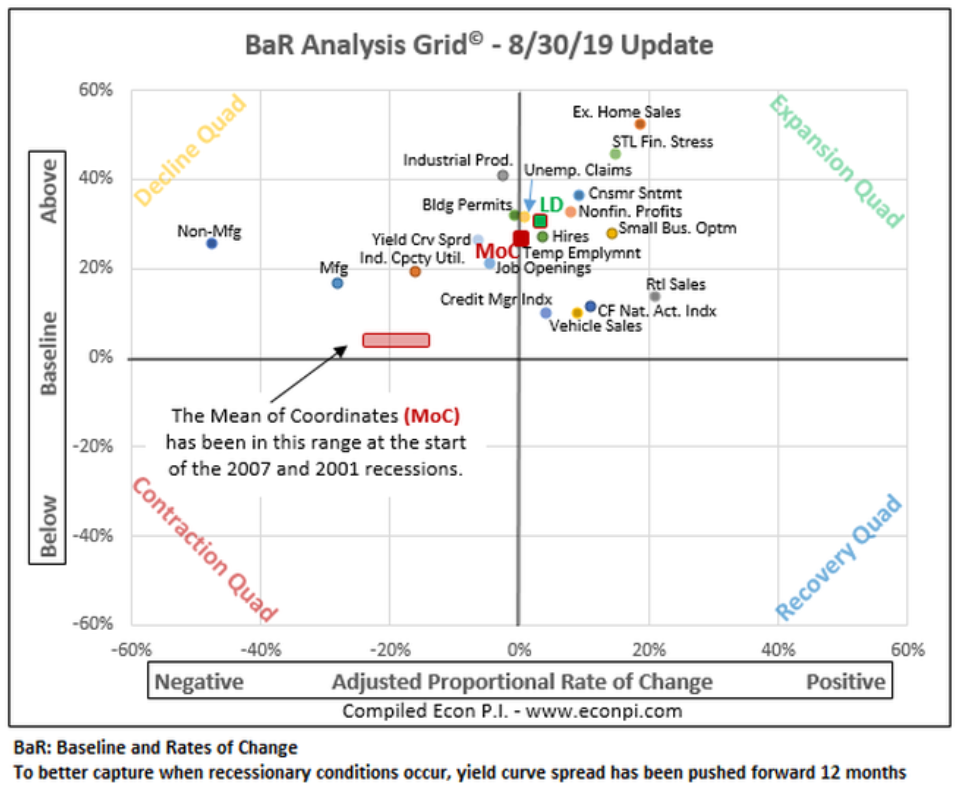 At the core of our portfolio management decision tree is “price”. After a rough August most of our models would suggest moving to more conservative holdings or to higher cash positions.  We see this as premature. While many economic indicators are in the DECLINE quadrant, most indicators are compared to year ago stats to try and avoid month to month comparisons that are affected by seasonality. Think back-to-school and Christmas for retail. Remember that a year ago the economy got a big jolt from the Trump tax cuts. As the stimulus wears off, we are naturally slowing down by comparison to 2018. Once we turn the corner to 2020, comparisons will be to a much weaker 2019 and we’d expect the market to react accordingly.

One last word on interest rates. Compared to the stock market, the bond market is a much more orderly market. While there are several variables that affect interest rates, one of the most prominent is risk. A higher risk borrower must pay higher interest rates than a quality borrower. The U S is still the largest and by far, the safest economy in the world. And yet much of the world has lower interest rates than we do here in the U S. This is putting undue pressure on our interest rates. An “inverted” yield curve is a normal precursor to a recession. This time we can hope, is different. Market rates are reacting to abnormal negative interest rates from abroad. If we actually look to be headed for negative rates, all bets will be off. No one knows what will happen then as there is no history to use as a reference.

I hope this helps in such uncertain times. If you have any questions or comments, please don’t hesitate to send me an email: wdeshurko@fundtraderpro.com or bill@401Advisor.com